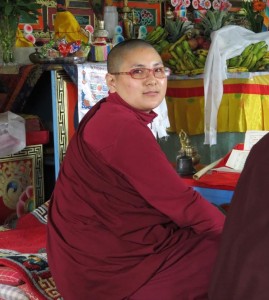 The plan to establish the foundation for the Chinese Medicine (CM) school, which has been named the Sikkim School of Healing Arts (SSHA), is well underway. HAP has received the donation of space at the Buddhist nuns’ monastery in Gangtok for the school and the first clinic. The first class of students is now being trained.

During Biris’s technical visit in October of 2015, she and the monastery’s nuns explored how Buddhist philosophy is very much rooted in Chinese medicine. Having the Buddhist nuns bless and embrace this endeavor is helping to grow the roots of the project and form the distinct humanitarian character that sustains the school and defines its mission. Rhangdrol is the head student and a principal founder of the school. SSHA’s first five students and collaborators, Rhangdrol, Preza, Sanjeeb, Sushmita Singh, and Prasant, have each agreed to take the full year of 2016 to learn the basic treatment curriculum.  In turn, the former initiates will teach the next group of students in 2017.

The 2016 the curriculum is as follows:

Much of this curriculum is being covered in weekly webinars, emails, and other communications. Some treatment techniques require hands-on teaching. Biris is providing the weekly lessons and has issued a call for contributing CM-experienced volunteers.  To HAP’s delight, ten seasoned practitioners have come forward to make commitments for on-site training in Sikkim. Biris will return in June of 2016 to do an in-person series of treatment demonstrations.

Upon completion of the year-long training HAP has agreed to the following:

The Responsibilities of SSHA are the following:

Anne Biris, SSHA students, and their leader Rhangdrol, agreed in principle to establish separate clinics for the poor and the affluent. A clinic for those who can afford to pay for treatment will produce funding for clinics for the indigent. Wealthy patients, thus, would then become supporters and sponsors of the humanitarian clinics and their programs. The donor clinic will be located in Gangtok, the capital and center of the province’s financial district.

Following are brief biographies of the first cohort of students in the Sikkim School of Healing Arts. Coming from different walks of life, these pioneering individuals are committed to establishing acupuncture as a growing medical field the Province of Sikkim.

Ani Rhangdrol, the head student of SSHA, is a nun in the Buddhist Monastery of Gangtok. She comes from Bharang, a village in West Sikkim on the border between India and Nepal.  She has dedicated her life to religion and has been practising Buddhism for 16 years. She leads a simple life in the monastery and has dedicated her time to helping the poor, especially the women in her native village. She is a keen student of medicine and has taken full opportunity of the project.

HAP has donated $200 for two months of English language training to raise Ani Rhangdrol’s proficiency level in conversation to the intermediate level and to improve her reading skills.

Sanjeeb Gurung runs a travel agency and is a trekking agent. When not studying, he is on the move and is familiar with almost all of the remote parts of Sikkim and surrounding areas. He has ample knowledge of the local medicinal herbs and is in touch with local medicine men from Yuksum, West Sikkim. As a trekker, Sanjeeb’s travels have brought him into contact with people living in different conditions, including some so poor that they cannot even afford their basic amenities, let alone medicine.  He has committed himself to this project and hopes to be a valuable resource for the people in his province.

Prasant Gurung is a civil servant in the police headquarters. He is responsible for the school’s social media. Prasant is also a DJ and has an outstanding aptitude for technology, which is serving the SSHA well. He is known in his office for his sincerity and dedication.  His interest in the HAP project derives from his belief that people can learn the art of herbal medicine, as there is an abundance of medicinal herbs in the region.

Sushmita Singh is a teacher by profession. She has been been working in the same school as Prasant Gurung, and the two have known each other for more than five years. Sushmita has a Bachelor’s Degree in Fine Arts and a post-graduate Diploma in Management. She is a very capable organizer and has a keen interest in new areas of learning. As a doctor’s daughter, she has substantial knowledge of medicine.

Preza Gurung presently works as the vice principal of a private school and has dedicated her life to teaching. She has a postgraduate degree in English Literature and a Bachelor’s Degree in Education. Her main interest in joining this project is to help Ani Rhangdrol deliver educational material in the local language to facilitate learning.